I chose to read a book I’d always wanted to but never had before as my Artist Dates for a couple of weeks.

I think Jonathan Swift just might have put a temporary cabash on my blog posting.  You see, I just read Gulliver’s Travels for the first time (an English teacher without Swift under her belt), and the whole satire on travel books has brought up some interesting points to ponder.   I took my time reading it and underlining passages, and putting stars on pages (I am actually going to teach the book to my 9th graders beginning this week), and it got me thinking about Swift’s attitude about those who publish their exploits…like me.

If Swift was alive today, he would have a field day satirizing social networking and blog postings!  There’s enough material on the world wide web that would have kept him writing indefinitely.   It’s one of the main reasons for my not posting recently, despite my initial desire to share my working through The Artist’s Way.

I will say that I have actually only done a physical writing of the morning pages once.  And I did it at night.  However, I do find that the morning stream of consciousness while I am commuting to work is probably as eye opening as writing it down.  And my ears hear it, so I think that what comes out has a tendency to stick better.   Beyond that, Swift has me feeling trepidacious about sharing anything more at this point.  His biting satire and obvious disdain toward those he saw as flouting their self-importance has prevented me from posting more about my personal discoveries through my morning “pages.”  Huh.  Go figure.  Perhaps it’s because I have begun purging some stuff that I really don’t want to look at.

Some Artist’s Date he turned out to be!  Weeks 2-4 themes are Identity, Personal Power, and Integrity.  And I picked Gulliver’s Travels.

Irony at its best.

Reading other people’s posts actually inspires me to continue with my own work through the process.  It’s just that nagging whispering in my ear holding me back at the moment.  I think that because the novel touched such a nerve in me, it must be considered a worthy Artist’s Date…but one that is making me take a hard look at myself in the mirror.  Or at what is mirrored in his pages.   How much do I IDENTIFY with what I read?  Do I misuse POWER?  And what kind of INTEGRITY do I really have?

How much do I have in common with the ultra-polite yet pompous and cruel Lilliputians?  Do I see some of their pettiness reflected in me?

How about a truly close scrutiny like Gulliver’s adventures in Brobdingnag?

And just how much of a Yahoo am I?

Thank God I read an abridged version that skipped over Swift’s Part III, the Floating Island of Laputa.  I did a bit of SparkNoting because I wanted to see what had been left out of the text I am using for my students, and I think I would have been incredibly uncomfortable with that section!

Swift’s barbs poke at me all the way from the 1700’s, damn him anyway!

Well, if he upset me that much, this MUST be some work of art with which to be having a “date.”   While my students probably won’t make any personal connections with his satire, they will at least have fun exploring the funny side of the 21st Century.  They will be creating political cartoons, writing song parodies a la Weird Al Yankovic, analyzing TV satire like Saturday Night Live (the GOOD episodes in the 70’s), The Simpsons, and The Daily Show.  They will also be writing short stories patterned after Swift’s style.  They already had some practice with the New York Odyssey when they updated Odysseus’ adventures as “he” and “his crew” meandered about New York State from Troy, NY to Ithaca, NY.

Ok…so this Artist’s Date is actually going to lead to the creation of some art, although it will be by my students.  I am creating the unit plan for them, so I guess I am still creating.  That and a massive headache from thinking so much.

But, for right now, I guess I am taking another look at why I write what I write for all the world to see (HA!  It’s not like I get that much traffic anyway…).   I know I chronicle my adventures for my children to look back at one day when I am gone, complete with pictures and videos, so that they might think, “You now…Mom did some pretty cool stuff.  We should do some cool stuff, too.”

Maybe that’s why all the folks published travel books in the 1700’s to begin with.  And maybe Swift, who never traveled beyond England and Ireland, harbored some jealousy in not being able to do so and took his frustrations out in his novel.   It’s human nature to ridicule the things we can’t do and secretly wish like hell we could.  How very Aesopian of him!

Yeah…that’s it.  At least the adventure sharing is justified.

Now that just leaves the burning questions about Lilliput.  And Brobdingnag.  And Houyhnhnmland.  And I don’t even want to THINK about Laputa.

Okay, so I am working through The Artist’s Way with a group of ladies in the area…it seems like a great thing to be working on during this really freezing cold tundra we are living in these days.  This whole Polar Vortex has brought crazy-cold temps, and even skiing is not as much fun because of it.

As much as I love hibernating in the winter with mugs of hot drinks, fuzzy jammies, a warm blanket and endless streaming on Netflix (OMG…BBC TV), it’s a really good idea to still the old creative juices now and again.  Last winter I spent this time period working up a sweat and pushing my physical limits.  This winter I am stretching the internal limits a bit. 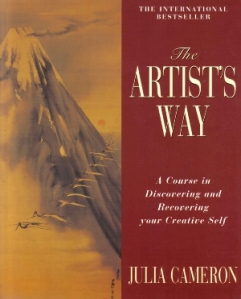 So…I guess the way this Artist’s Way works is that, for twelve weeks, one works to get into the following habits:

1- Morning pages: non-focused purging of the mind each morning, ideally on paper.  The goal is to write three pages every morning.  Well, I get up at 5 already, and am out the door by 6 for a 30 minute commute, so that’s pretty much not going to happen.  Since the idea is to purge the mind of junk before beginning the day, I am doing so verbally in my car while I drive.  I already do a form of this after school on my way home from work…venting my frustrations before entering my sanctuary, so to speak.  So now I am doing it twice a day…twice the purging is probably a good thing, anyway.  Fortunately, with modern technology being what it is, I don’t have to worry so much about the folks driving next to me thinking I am a lunatic talking to myself; they probably assume I have a blue tooth.  It’s no longer considered a one way trip to the psych ward if one is seen talking to oneself because it’s most likely they are using this modern technology.  What a great cover for me!

2- An Artist’s Date: once a week, we are supposed to take ourselves out on a date alone to court our inner artist.

3- A Nature Walk:  connect with Nature at least once a week.  (During the Polar Vortex?  Ummm… that’s not working out so much so far).

Here we are, then–Week 1: Recovering a Sense of Safety.

Our group was challenged to explore our Monsters, those nay-sayers and negative entities in our pasts that have had an influence on our creative selves.  Ironically, it seems that some monsters decided to rear their ugly heads this very same week.   As a result,  I have been working hard to recover my sense of safety.

My morning “pages” have centered around my feelings of betrayal and renewed sense of violation from these “Monsters”, and it is true that purging the stream of consciousness verbally has helped.  So did writing and deleting emails.  Even though it took several days for the negativity to subside to something more manageable, it is synchronistic that this particular “Monster” attacking my creative expression happened to emerge during my first week of The Artist’s Way.

For my Artist’s Date, I went to visit a Balloon Manor exhibit that was held in Rochester this past weekend: a five -story representation of Jack and the Beanstalk created entirely from balloons!

From a five-story beanstalk to a life-sized “Jack” and his mother, every single detail was a balloon.  Flowers, a vegetable garden, apple trees with birds and bugs and half eaten apple cores… the detail work was phenomenal.  The entire Sibley Building smelled like latex!  It was so awe inspiring, though, to see what the creative imagination can put together with simple materials.  Absolutely fantastic!

To top the visit off, the Aerial Arts of Rochester was there to perform Jack and the Beanstalk on silks!  I was glad to get to see Illy, Will, Kim, and Chris flying through the air, even though it is still bittersweet due to the fact that I shall not be able to do silks again.  Damned injuries and vertigo!  But I do have the memories of having tried ot to the best of my ability. 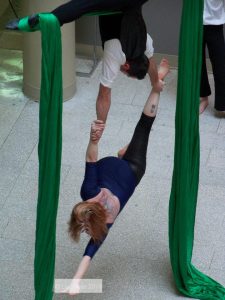 If you click on the picture of Illy and Will, you will see one of the video clips I took of their performance!

Week one was rough facing those monsters, but working the Artist’s Way will help me to tap back into the creativity.  I have my NaNoWriMo book to finish!!  🙂