The first day on the road was scary…and I hadn’t even left the garage yet!  Last minute jitters had me taking deep breaths, telling myself that I could do this.  I had planned and prepped and prayed.  I just had to believe and put it in gear.  I also looked at my passenger seat and remembered that Mom was with me for the long haul.

In order to make sure I would not chicken out, I made plans to meet a friend from high school in Erie, Pennsylvania for breakfast.  Nothing like having a commitment with a live person to motivate me to get on the road by 5 AM in order to get there by 9.  It was a beautiful day once the sun came up, and having the sun at my back, lighting my way westward, gave me confidence. 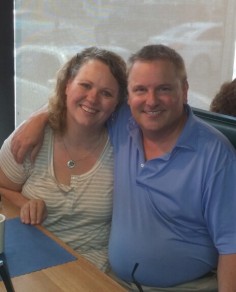 It had been about ten years since seeing my friend, Greg.  It was great to sit, once again, in a diner drinking coffee and eating breakfast food!  Your Host was the diner where we hung out during our high school years (even though we went to two different schools).  It was like old times, and we had so much to catch up on.  Plus, Greg was just the person to give me that extra boost of confidence that everything was going to go perfectly for my trip and that I had nothing to fear.  Thanks, Greg!

From Erie, my next destination was Serpent Mound in Ohio.  Since anything to do with ancient peoples fascinates me (especially their myths/legends), when I learned that there was a quarter mile mound in the form of a giant snake nestled in the hills of Ohio, I had to go!

I had carefully calculated the mileage using Google Maps and the time estimates for getting to where I was going for the entire trip.  Let’s just say that the timing was NOT in alignment with the claim by at least two hours, even though I was doing the speed limits and following the maps.  But at least I got to where I was going!

Serpent Mound is most definitely NOT anywhere near any main highways, and the roads there wound through hills and forests. It was a beautiful drive, and I found myself sing

ing “The Long and Winding Road” over and over.  It was early evening when I finally found the place, and I felt a sense of accomplishment just for getting there!

In order to best see the mound, there is a large tower to climb.  With my bad knee, I was terrified that it might give out while climbing.  Then I told myself that if I DIDN’T climb up there, I would always regret it by saying I had the chance and got too scared to do it.

When I finally got to the top, I was glad I had gritted my teeth through the pain. 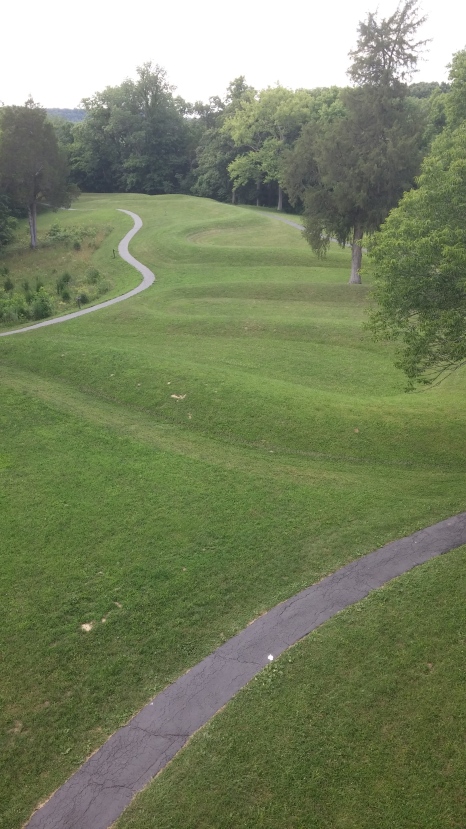 The view was wonderful, and the pictures do not do it justice.  I hiked along the path around then entire mound.  There were only a few others there, so I felt more or less totally alone in this peaceful place.  This park is where I placed the first of my crystals.  Every time I dropped or planted a crystal, I offered the following song:

By the Earth that is her body,

By the Air that is her breath,

By the Fire that is her bright spirit,

To the living Waters of her womb,

May the peace of the Goddess

Be forever in your heart!

The circle is open but unbroken,

Once I was ready to leave Serpent Mound, it was time for me to find the campground I had booked nearby.   I was not at Rocky Forks State Park very long– only long enough to explore a little, fix my dinner, get a hot shower, and go to sleep– but it was a beautiful place. 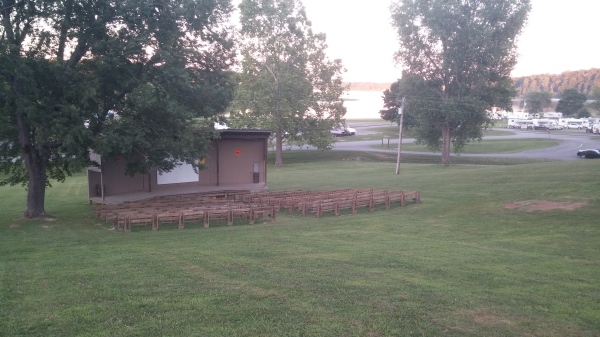 On my first day on the road, I learned no to be afraid to to just trust that the Universe held me in its hand.  I needed to simply enjoy.  Sleeping in the van was surprisingly comfortable, and I felt blessed to have made it through that first day. If I can do one day, I can do any day!