I really was hoping to see a large variety of birds and hear a splendid chorus today, but it was the thrum of bugsong to the insectual tune of “Lunch is Now Being Served on the Main Path” that made for a rather short walk. It seems that Deep Woods Off is a delicacy at Derby Hill, and every flying insect was happy to find me on the menu.

“I was as much affected by the faint hum of a mosquito making its invisible and unimaginable tour through my apartment at earliest dawn, when I was sitting with door and windows open, as I could be by any trumpet that ever sang of fame” (Thoreau, “Where I Lived, and What I Lived For”, Walden).

So, H.D., do you mean that you were affected in a way that the sound of a mosquito is something you cannot ignore, like the blaring sound of a trumpet or bugle at Reveille? Or did it affect you with its melodious hum like a jazz tune? If it’s option number one, then I get you! If it’s the latter, then I would like to introduce you to “Lunch is Now Being Served on the Main Path” and see if you will still be singing the same tune.

These pesky creatures managed to get behind my sun glasses and into my eyes!

Needless to say, I did not stay long at Derby Hill. As pretty as it was, there was hardly a bird in sight, and those who were flying nearby took off when they heard me fighting with the bugs. But at least I managed to get a few pictures before running away!

The paths through the fields and forest were actually quite charming even though those that came to greet me were significantly less so!

I am sure the birds love this sumac…and the picture does not do justice to the beauty of the flowering stems. 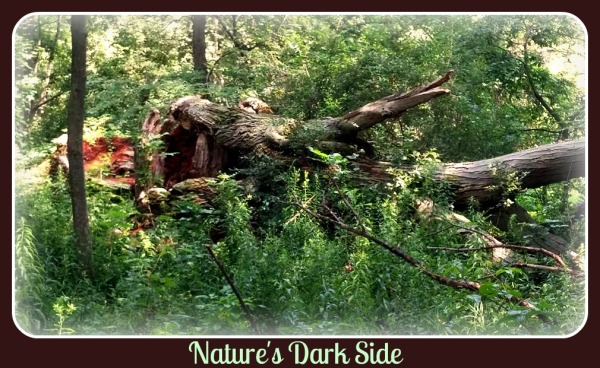 Along with the bugs that most likely house themselves in what is left of this tree, Nature does remind me that with life, there must also be death. I accept and respect that…but then I got the hell out of there in an effort to preserve the life I have!

As a result of my bug experience, I decided that, at least for this afternoon, I would do my exploring in my car for a bit. 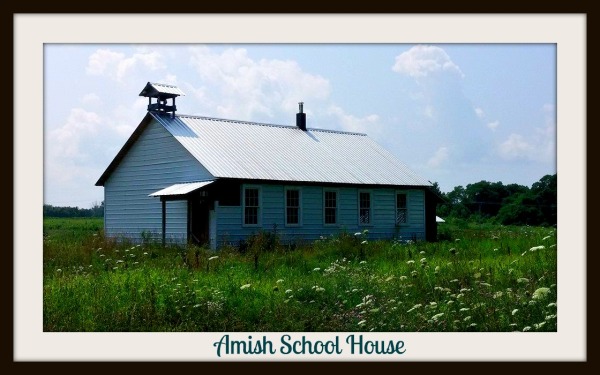 In my travels back to the cabin, I came across an Amish school house. As I looked at what seems to be a one room structure, I wondered how my students would fare in such a place. They already think that spending 55 minutes with me in room E210 is akin to Dante’s sojourn through Hell…can you imagine if they had to spend a whole day with me in one room? They’d go nuts. I have a lot of respect for the teachers of old who taught all subjects to all grade levels all in a single room. I cannot imagine how they did it. And so my respect and utter awe goes out to whoever is in charge of this school. I couldn’t do it!

Quite honestly, I wanted to pop in to see if Ike Godsey was in! For those of you too young to know who Ike Godsey or his wife Corabeth are, then click the pic for a link. Although this feed mill may not be a general store like Ike’s, it certainly did have the nostalgic aura of one. Like my admiration for those one-room schoolhouse teachers, I also admire the pride that came with a Mom-and-Pop business. Sadly, today’s economy does not allow small businessmen to survive, let alone thrive. The quaintness and charm of places visited on television or in literature…like Godsey’s store on Walton Mountain or the Olsen’s Mercantile in Walnut Creek…is not as readily available as it once was. The mercantile was not only a place of business, but a place of social gathering as well. Thoreau, too, enjoyed his visits to the “civilized” realm away from the pond.

“Every day or two I strolled to the village to hear some of the gossip which is incessantly going on there, circulating either from mouth to mouth, or from newspaper to newspaper, and which, taken in homeopathic doses, was really as refreshing in its way as the rustle of leaves and the peeping of frogs” (Thoreau, “The Village”, Walden).

This goes to show that even though Thoreau chose to sequester himself in the woods, he was by no means a hermit. He knew the difference between loneliness and solitude. Over the past couple of years I have come to know and cherish that difference. I guess that is why the words of both Thoreau and Emerson have a profound effect upon me. I hope that I shall be able to convey that to my students as we read from the Transcendentalists.

*Sigh* I know that there are still country general stores out there, but they are few and far between. Their numbers have been greatly reduced by an economy that does little to sustain them.

On the flip side, though, I do have to admit that I love Wegman’s. Hypocritical?  Mehhhh… My apologies to the Godseys and the Olsens. 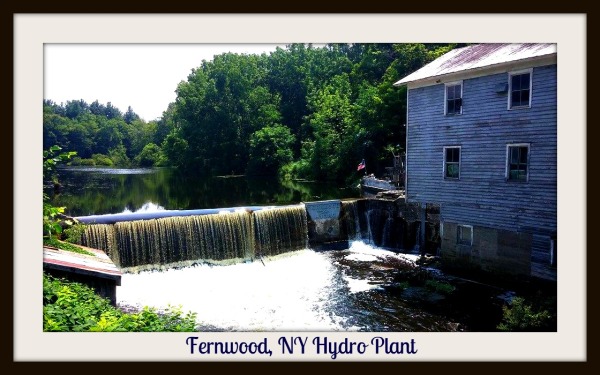 Behind the Feed Mill is the Fernwood, NY Hydro Plant. That’s what the stone sign says! When I’d gone canoeing earlier in the weekend, I’d been warned not to go too far down the pond to the dam. Barbara, the cabin proprietor, had been talking about beavers building dams in the creek. She also talked about how the town was doing something with a dam, so I assumed that her warning pertained to running into a beaver dam. Of course, I did go in that direction out of curiosity and a photo op, but seeing no place where beavers had built anything at all, I’d turned around disappointed. It seems that if I had continued on, though, I would have been treated to Fernwood’s version of white water rafting. I don’t know how well the canoe would have taken it! After having experienced white water rafting in Colorado’s stretch of the Rocky Mountains (and being terrified at being thrown into the middle of the raft when going over a waterfall), I do not think the Fernwood Falls experience would have added to the serenity of my Walden Project. I am glad I turned around, but it does make for a pretty picture from the other side.

And that concluded my sojourn for day three. Once more to the invigorating scent of a shower infusion of peppermint and lavender, and an evening with Harry Dresden. Even in the woods, I still love my murder mysteries!