How perfect is it that I am able to combine my Summer Challenge with preparation for the upcoming school year?

When I return to work after this summer respite, I will be teaching juniors for the first time in my district. After looking at the curriculum possibilities, I have decided that I will begin the year with the Transcendentalists. What better time to read Emerson’s “Self Reliance” and Thoreau’s Walden? Thoreau, in particular, was fond of writing his essays as personal narrative. It is ironic that both Emerson and Thoreau fall into the list of Common Core works when the ELA author of the Common Core State Standards, David Coleman gave a presentation at the New York State Education Department in 2011 titled, “Bringing the Common Core to Life” in which he said:

Do people know the two most popular forms of writing in the American high school today? Texting someone said; I don’t think that’s for credit though yet. But I would say that as someone said it is personal writing. It is either the exposition of a personal opinion or it is the presentation of a personal matter. The only problem, forgive me for saying this so bluntly, the only problem with those two forms of writing is as you grow up in this world you realize people really don’t give a shit about what you feel or what you think.

I beg to differ.

The single most important piece that students will write is the college essay. It’s not a persuasive argument, and it’s not a literary analysis. It is a personal narrative about why the student wishes to pursue his/her higher education at a particular institute and what life experiences have brought him/her to the decision to apply. No matter how many arguments or analysis essays students produce, with no real practice in writing about themselves and what they really think/feel, the college essay will be an incredible source of stress for them. So in order to prepare them to write about themselves, we will look at essayists who did write about their thoughts and feelings. And what better place to start than with Emerson and Thoreau?

Because I will be asking students to write about their own experiences, I made an effort to model that behavior with my own Walden Experiment. To begin, I went so far as to rent a small cabin in the woods (yes, all by myself) and hiked about the area as much as possible. I recorded my excursions on MapMyWalk, a phone app that records your progress, and I took plenty of pictures, both of which I shared with my friends on FaceBook to whet their appetites for when I would write my blog entries.

You know…Thoreau would have LOVED modern technology. Oh, he may complain about man’s infringement upon Nature with his trains and fences, but as one who desired to share his Walden Pond experiences, I am certain that he would have blogged, tweeted, MappedHisWalk, and shared with the social networking cyberworld. As he said about his decision to live in a small cabin in the woods, “I do not propose to write an ode to dejection, but to brag as lustily as Chanticleer in the morning, standing on his roost, if only to wake the neighbors up” (Thoreau, “Where I Lived, and What I Lived For”, Walden).

This is Thoreau’s cabin: 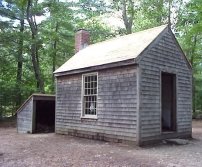 And here is the cabin I rented for five days:

It may not have been as rustic a Thoreau’s little place that he built (yeah…it had air conditioning and DishTV, which I avoided using…well the TV anyway), but it WAS in the woods and on a pond. It was also extremely economical, of which Thoreau would approve. Personally, I highly approved of the modern conveniences rolled into my experiences in Nature. I was especially grateful for the WiFi that was available! No hating about electronic devices! Thoreau would have approved of the ability to get the word to the masses.

Speaking of Chanticleer, I have been lied to my whole life about a rooster crowing at sunrise. Feeder Creek’s Chanticleer crowed ALL day and even into the evening! He, too, wanted to make his voice heard at every opportunity. So, like the rooster, I crowed on FaceBook and MapMyWalk every day.

And I kid you not, there were even bean plants growing in the garden right behind the cabin. As a place to partake in a bit of what Thoreau wrote about, I could not have found a better place without going to Massachusetts. And what was even better was that it was only about a two and a half hour drive from home. Because of it being in Upstate New York, I also was able to double dip the experience to include it as part of my Summer Challenge. I love how things work out perfectly. 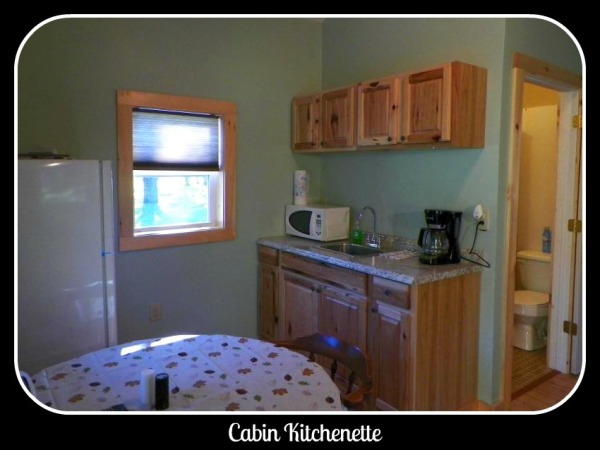 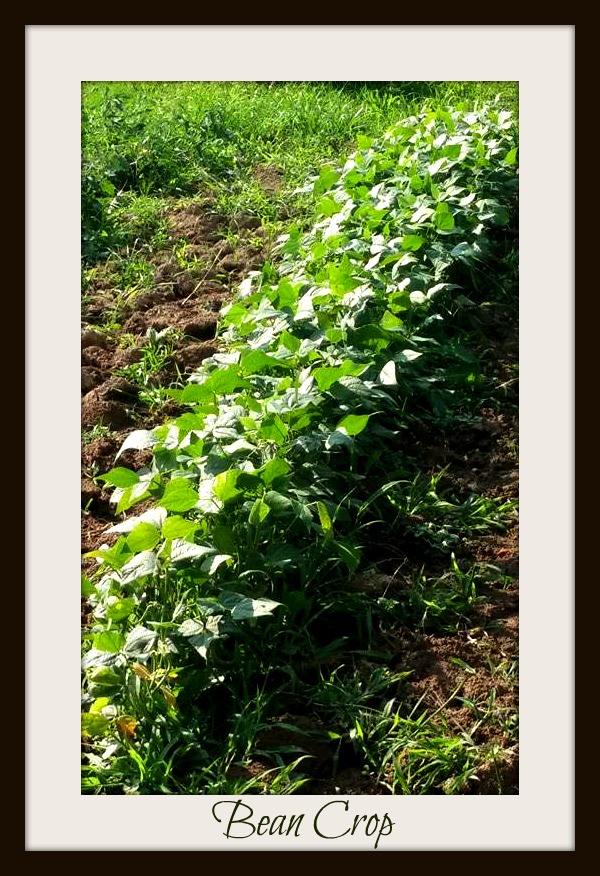 Even with all the lovely modern conveniences that made me feel comfortable, I still partook of the outdoors in Throeauvian fashion. The first place I explored immediately after unpacking was Grindstone Mill Pond. The owners of Feeder Creek Lodge and Cabin, Bill and Barbara VanWormer, offered me use of a canoe to aid in my explorations.

“A lake is the landscape’s most beautiful and expressive feature. It is earth’s eye; looking into which the beholder measures the depth of his own nature. The fluviatile trees next the shore are the slender eyelashes which fringe it, and the wooded hills and cliffs around are its overhanging brows” (Thoreau, “The Ponds”, Walden).

And so I hopped into the canoe…after first tipping it and myself with my first attempt to get going. Truth be told, I was afraid that there might be spiders in the canoe, and so I was tipping it into the pond to wash them out. Yes, that is the story I am going with! Thank goodness I had the foresight to put my cell phone in a plastic bag in my pouch…it serves as my camera. Once I finally got going, a huge spider DID make its way across the rim of the canoe, and I swear he was begging to join his friends for a swim. I was only too happy to oblige him. Thank goodness the remainder of the ride was arachnid-free! And was was glad to have sprayed myself with 85 SPF sun screed and Deep Woods Off. It really did make for a much more enjoyable afternoon on the pond.

Rather Monet-esque if I do say so myself… 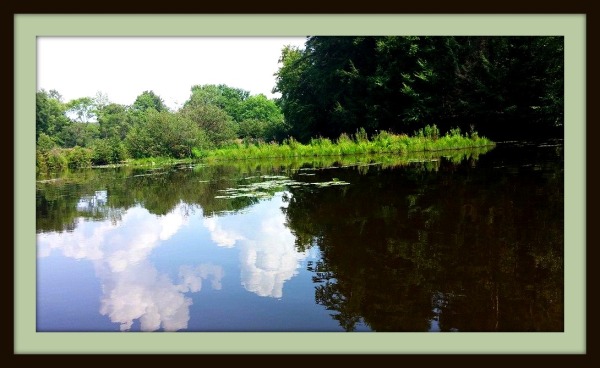 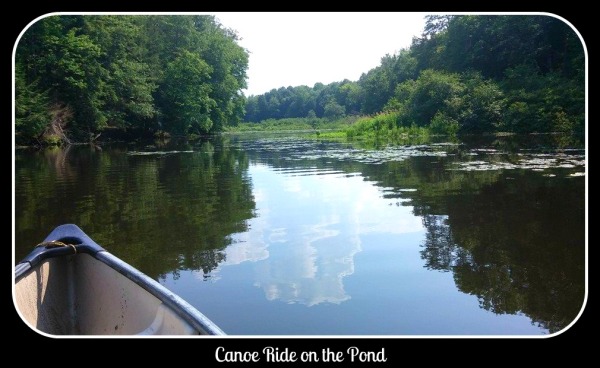 And so, as the afternoon wore on and I returned to my cabin, I spent the remainder of the evening outdoors in my lounge chair enjoying the words of Henry David Thoreau and contemplating how I might experience the joy of Nature that he felt for myself.

And I am grateful the Deep Woods Off helped to make that experience more joyful! I do not know how Thoreau managed the bugs!