The Western New York Landmark Society celebrated its 20th Ghost Walk in Rochester!  And how fun was it to be a part of the Ghost Walk once more!

After taking a few seasons off from performing as part of Rochester, New York’s spooky past, I was glad to play the part of a spiritual medium in a seance.  The Spiritualist Movement was started in the Western New York area, and prominent psychics spent much of their time in nearby Lilydale (which is also a very interesting place to visit, by the way!)

Writer and historian Cindy Boyer started the Ghost Walk tradition 20 years ago, and creepy tales of true events in the area have thrilled audiences every Halloween season!  This was my 5th time performing with other “ghosts” in telling these tales on the porches of landmark houses on Arnold Street in downtown Rochester.  The tales are quite chilling (and often, so is the weather), but the fun of playing a ghost and telling a tale (sometimes 14 times in an evening) does warm the heart.

I always look forward to a phone call or an email from director Mary Krickmire in August.   She selects her actors from a vast pool of Rochester’s talented, and we DO have a HUGE number of talented performers in the area!!  There are over 40 community  theatre companies in and around Rochester!  I am thrilled and feel honored to be on the list of those called, and I’ve enjoyed being part of something “historical.”

This year, as I said, I got to play a spiritual medium…yet I was one of those who took advantage of the rise of the Spiritualist Movement.  Like Whoopie Goldberg’s character in Ghost, I was an opportunist. 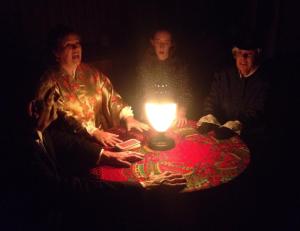 My character not only duped those mourning the loss of loved ones, but she recruited young people into helping pull off the charade.

That’s not to say that I think Spiritualism in itself is a hoax.  I do believe that there are those who can communicate with the other side… but I sure had fun playing up the charlatan role!  I had to be asked to “tone it down” several times so as to attempt to make it seem more real to the audience before being revealed as a hoax.

I guess I was channeling too much Whoopie…but what fun!  🙂 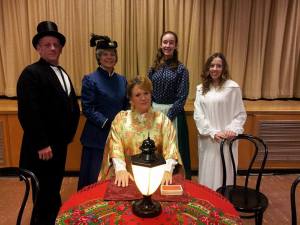 2013 has been one heck of a year, and ever since January, I have been pushing myself.

Thanks to Will D’Ovidio and Aerial Arts of Rochester, I pushed myself off the couch and into the air (sort of).

Patty Hedrick pushed me in the direction of better eating.

I pushed the pack away from me and quit smoking (nine months this week!!).

I followed my bliss and pushed from one ocean to another this summer.

And I pushed myself to start doing 5Ks…even being chased by zombies!

Today I pushed myself again with the Push Yourself 5K.  What made this one different was that I was surrounded by faculty and students from my high school…it wasn’t just me all by myself, anonymously running/walking.  It’s actually easier when I am incognito and no one knows me because (in my mind) I worry that people I know who are in much better shape than me will look at me and say, “humph…” as I trudge along.  Or that students might laugh at me because I still jiggle when I jog.  That is what nearly held me back from pushing myself out of bed this morning to get ready.

Now people might want to argue that it doesn’t seem like I really care what people think because I posted those videos of myself doing aerial silks and other pictures.   In those instances, the internet distances me from thoughts of judgement or snide remarks, so I am not bothered by that.  What did make me feel a bit trepidatious today was being surround by former and current student athletes who actually intimidate me.  Those who play soccer, and volleyball, and run track… they are all in great shape, and this 5K seems like another run in the park from my viewpoint.

To be completely honest, I felt out of control.  I am absolutely not in my element, and there are witnesses who know me in the classroom as one who is totally in control there.  The roles were reversed, and quite frankly, I was scared to run.  That’s why the other races didn’t scare me…I was my own witness, and then I shared my feelings of success.  Today, for the first time, I was actually afraid of being laughed at.

But you know what?  That didn’t happen.  Students actually encouraged me to “push myself” to keep going along the way.  Some came up to me afterwards to say that I’d done a great job in finishing…and that made me feel all the more successful.

At one point, I even caught up to the boy’s soccer team during the last mile of the race.  I called out to them, “Hey, Guys!  There’s a 51 year old lady catching up to you!  Push yourselves!”  They looked back, laughed (not at me, but with me), and then took off running.   It was fun, and that’s what it’s all about!