Homecoming once again after a meaningful Summer challenge: Going Off the Map and Facing Our Dragon!

Looking at old-fashioned maps, one would often find a dragon icon that would represent uncharted, unexplored waters.  That big, ol’ scary dragon symbolized the unknown which, more often than not, we have a tendency to fear.

And that was our summer assignment: to face our dragons by going places we’d feared to go before.  We didn’t physically have to leave to “go” anywhere; it could be doing something we’d always thought “maybe one day” or “someday I’ll do that.”  It could be facing a part of ourselves that we feared to look at in the mirror.   With so many ways to interpret this assignment, it made it so accessible to nearly everyone.

Anyone who has read this blog from its beginning knows that I have been working through major life changes over the past couple of years.  I first described myself as being on a twisting, winding path through the labyrinth of life.  I talked about the break-up of a long-term relationship and how my children grew up and moved on to their adult lives left me feeling a bit like I was in the desert, alone.  I even worked on discerning the difference between loneliness and solitude.  But all of that work toward being happy on my own was focused on the walls surrounding me at home.  How did I go home to an empty place every day and not feel lonely?  And I finally came to feel that home was my refuge, my safe harbor.  I’d faced that dragon and won.

However, finding comfort in my home surroundings came with a double-edged sword.  I got too comfortable being home alone, and I took to shying away from people altogether.  I had stopped socializing and preferred to curl up on the couch with either a book or the television…and of course, smoking and overeating.  I was self-medicating while I was home alone.  That was the “too much of a good thing” syndrome.  While it was great to love being home, it wasn’t so great to avoid people.

So I got involved with the Aerial Arts Challenge.  I had a contract that kept me on a schedule, which kept me getting out of the house.  I quit smoking, I changed my eating habits, and I got a whole lot healthier.  I also got more social, even if it was on a schedule.  I began to expand my comfort zone beyond my four walls.  Several dragons slain there!

Okay…so I was getting off the couch if I had somewhere to go with someone.  There was still one more dragon in that scenario that needed to be faced and conquered.

I had to face the fear of going out and doing things by myself.  It was back to solitude (but not loneliness this time…) and being comfortable with spending time with ME.   I wanted to face the stigma of eating alone in a restaurant without having that nagging feeling that people were looking at me and pitying me.   I wanted to get in my car and just drive without even using a map to get somewhere new… to follow my own intuition and trusting that somehow I would get where I wanted to be.  And instead of calling it “Facing My Dragon,” I called my posts “Following My Bliss.”  I went to Maine, the Renaissance Faire, hiking, climbing, walking, 5k-ing, the Irish Festival, and all kinds of activities all by myself.  I learned to be my own company and to actually enjoy being with ME.

So how did the Creative Soul Matters/Decor Team represent this on homecoming Sunday at church?

There’s the Dragon!  And there’s the compass rose that took us Off the Map.

I am pleased that the dragon is facing forward, and not off to the side.  It allows each of us to look him in the face and

From this angle, his eyes look a bit scary, as if daring us to continue to stare him down.   The challenge was to keep moving toward our uncharted territory while keeping him in our sight.

I am glad that this Chinese New Year’s Dragon was purchased for this decor.  For one thing, Homecoming Weekend is like a New Year for many UUs.  After a long summer of a limited schedule, it’s back in full swing with three services a week, complete with new monthly themes.  It’s a new year with new goals for the congregation.  For teachers like me, it’s also a new school year with new challenges and new opportunities.  So the New Year’s Dragon was a good choice to face the new year.

The rainbow colors is also significant as it represents the strides made in facing the injustice of prejudice against the Gay community that has been present in America and the world.  Standing up to this dragon is beginning to bring about the necessary change needed in this country and in society as a whole.

This particular Dragon costume is designed for only one wearer (unlike the traditional Dragon suits that require a team to work together in wearing it!)  This reminds me of my dragon that I needed to face inside myself…it was a solo action to overcome my fears.

For me, this was significant as I tried to go “Off the Map.”   The first time I actually went ahead and trusted myself to get where I wanted to go, I chose to rely on cardinal directions.

When I wanted to go to Maine, I told myself that I would get on the NYS Thruway and head east until I ran into an ocean.  Then I was going to turn left and head north until I found lighthouses and cheap lobster.  Those were my only driving directions.

Well, you can go back to visit my reflections on this trip because I made it!  I left my door at 7:00 AM and I was taking pictures of a lighthouse by 4!

I tried applying that philosophy to my summer traveling in general.  I know that if I drive west out of the Rochester area, I will eventually run into water.  It may be Lake Erie, the Niagara River, or even Niagara Falls, but I will hit water!   I know that if I drive due north, I will also run into more water…Lake Ontario!  Or if I am a bit further east in the state, going north will still lead to water as I come to the St. Lawrence Seaway.   And if I drive far enough south, I will hit the Gulf of Mexico!  So when I want to do road trips that have no specific address as a destination, just a general area, this is my way of going about it.  And I am no longer afraid to get in the car and go alone. 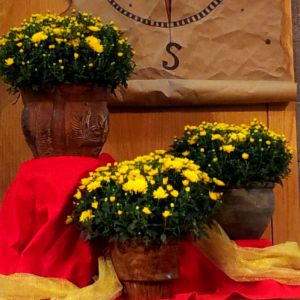 Now look at the flowers.  To me, these mums remind me of fireworks.  The dragon is flying overhead, and the flowers are an explosion of color (they are even more open now).  However, some buds are more open than others…just like fireworks exploding.

Fireworks are set off during the New Year as a celebration of light, but their noise also scares away any residual negativity from the previous year.

I faced my fear of going out and exploring my world all alone.  I ate that inexpensive lobster dinner!  I found eight lighthouses!  I climbed that mountain!  I jumped in BOTH the Atlantic and Pacific Oceans!   I joined in at the Renaissance Faire as a participant, even though I was by myself!

I am very pleased to have faced this dragon and to have completed my Summer Challenge.