I woke up this morning with the decision to go for a waterfall hike already made up in my mind.   It wasn’t even like, “What shall I do today?”… it was already a given that I was going to seek a new waterfall somewhere!  So I picked up my phone and went to my All Trails Hiking App and decided to hit Barnes Creek Falls near Canandaigua Lake. 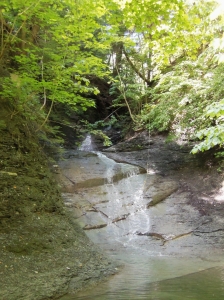 When I first found the park, I wasn’t sure there’s even BE a waterfall based on the condition of the creek.  It was merely a trickle and didn’t seem to be enough water to have come from a waterfall of any sort.  I thought it was all dried up and would be nothing but a rock bed, and I nearly turned around to seek another place to hike.  Considering I’d driven nearly an hour to get there, I decided to keep moving forward and hope for the best.

I am so glad that I did!  Although it wasn’t a “raging” falls, there was enough water coming down to make it pretty and even refreshing to wade in the pool at the bottom.

What most caught my eye was the yellow rope that someone had attached to a tree to aid in climbing up the falls.  Hmmm….did I dare to try it?  In spite of what this picture looks like, it actually was a pretty steep ascent.  I worried a bit about my elbow (tendonitis which has not yet healed), but I figured that since I’d bothered to drive out there, I was going to try anyway.  There happened to be a family that had also followed the trickle to find the waterfall, so the Dad was there to dial 911 in the event I fell!  He agreed to keep his cell phone handy till I was either safely at the top or had safely returned to the pool.

I was surprised to find that climbing with the rope didn’t hurt my arm; that was a good sign to keep going.  Once I got past where the rope ended, I had to continue on the rock formations that kind of looked like steps…I whipped out my camera to snap a picture from where I was at the end of my rope (ha! ha!) to mark how high I’d climbed so far.  I kept 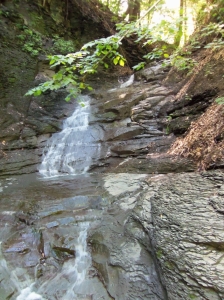 going up the “steps,” but I didn’t realize how steep they were until my water shoes started slipping on the rocks while I was climbing.  I realized that I wasn’t going to be able to continue upwards (there was nothing to hold onto and I was leery about the lack of traction on my shoes).

That’s when I looked down.

Not a good move. 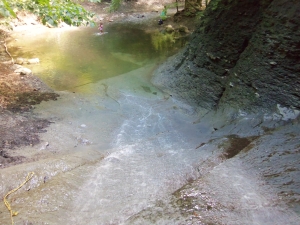 That’s when I froze for a bit.  You can see from looking at the rocks how smooth they are, and even though I wasn’t going to fall from a height akin to Niagara Falls, those rocks could have done some serious damage if I wasn’t careful.

I just told myself that I’d managed to climb up there, so I could get down, too.  I had to find my footholds carefully because the more nervous I got, the slipperier the rocks seemed to become.   When I finally got back to the rope, I was so happy!  It made me feel secure, and I cannot believe how much I was able to lean out away from the rock wall when I was climbing using that rope.   I felt my aerial experiences helping me out at that time!!  🙂  Thanks, Will D’Ovidio! 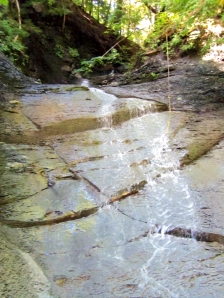 This was my view once I finally got back to the safety of the pool! 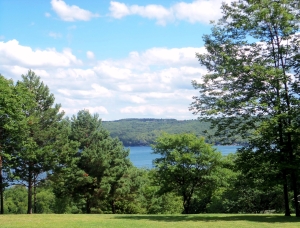 As I exited from the creek bed and began my ascent up the hills nearby, this was a view of Canandaigua Lake.   One of my goals is to visit the wineries throughout the Finger Lakes and do some sampling on a wine tour!  That is bliss for another day! 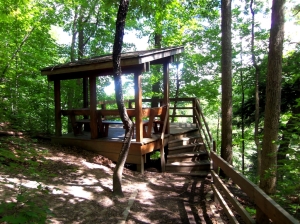 I continued along the upper trails above the creek and falls… this is one of the lookout posts.

It was a gorgeous day for a hike, and I am so glad that I woke up with that in mind!  🙂

One comment on “Following My Bliss: Barnes Creek Falls”