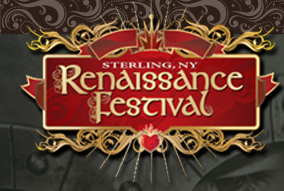 Let’s face it… I love this time period!  Not that I’d want to live there, but it sure is nice to romanticize about gallant knights, the code of chivalry, ladies in waiting, kings, queens, and eating without utensils.  Fun, fun, fun!

It was time for another road trip, and I took advantage of the fact that our blistering heat wave broke with the massive storm last night.  I decided to drive the hour and a half to Sterling, NY for the Renaissance Festival.  My mp3 was loaded with Blackmore’s Night, Loreena McKennitt, and Stone Row (there’s a plug for you, Nick Corallo!), and the music blared from my speakers all the way there…including during my drive thru at Tim Horton’s for coffee!  Once I had my fortification, I was ready for my day trip and some adventure! Huzzah!!

It seems that the rain we’d had in Rochester was slowly wending its way eastward…toward Sterling.  Let’s just say I had a soggy start to the day, and my hair paid the price.  Not that it hadn’t already suffered…I made the mistake of cutting it last week, and I am going through severe remorse.  Fortunately for me, the hair grows fairly quickly, so I should be in a better place in a few months.  Until then…Rocky the Squirrel it is!

The best part of the Renaissance Faire is that it is a place to leave your ego in the parking lot and join in the fun.  It especially helps when you attend these things by yourself and don’t know anyone…or better yet, no one knows you!  🙂

I didn’t take any pictures earlier in the day due to the rain.  I didn’t want to ruin my camera.  Somehow, though, those who allowed the rain to wash away the ego seemed to be having the most fun.  Those huddled under umbrellas were complaining about the waste of money to come that day.  Not to mention that the storm the previous night knocked out all the power, so some services (like the “modern” bathrooms) were limited.

HELLO!!!!  NO ELECTRICITY DURING THE RENAISSANCE ANYWAY, DEARIES!!

It’s much more fun to play in the rain!  It took me a little while to let go of my shyness (I can hear some of you choking from here!), but once I got rolling, that was it.  I was in it for the day.

I had fully intended on renting a costume until I found out how much they cost to do so.  Sadly, the one I’d made got ruined, so I shall have to procure another before next summer so that I can return in style (with a better hairstyle to boot…).

After about an hour, the rain stopped…huzzah!  That’s when I went to see the DaVinci Brothers Show and got selected to be Julianna Potato in an Italian opera.   Yup…that was fun! 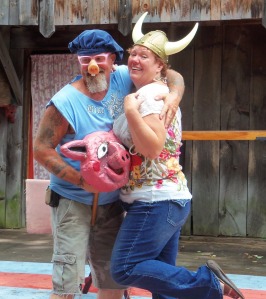 With my “one true love” Phil Prosciutto (yes, it seems that Bob DaVinci chose a real pair of hams for this one!)

My knight on his shining…hog

With our fair director, Bob DaVinci

Far too much fun!  But what could top these lovely pictures?  A video, you say?  Huzzah!

Of course, I had to make the usual Ren Faire rounds, including the Don Juan and Migel show

and Shakespeare!  This year they performed an abridged version of The Tempest. 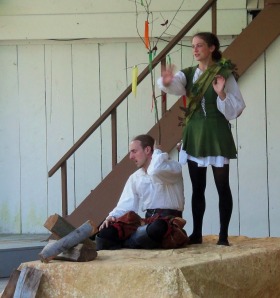 Other fun included get picked (huzzah!  Picked for two shows in one day!) for a hypnosis show!  Apparently, I had a great time…the best show I ever slept through!  Seriously, though, I can remember what we had to do even if I still felt compelled to do what was suggested…including drinking Happy Juice and getting happier and happier by the shot, singing Happy Birthday to the Queen while dancing, yelling at the guy sitting next to me for “pinching” me (he really didn’t but it sure felt like he did!), and then when I complained that the young man (who’d been told to laugh harder the more I yelled at him) was about my kids’ ages, the hypnotist suggested that I was a cougar and to flirt with him.  Again, too much fun!  🙂  No pics of that show, though!

And there was the food (they ran out of turkey legs by the time I wanted to spend the $8.50 to buy one…the Universe’s way of telling me that it was too expensive).   I did get salt potatoes and “balls of fire” (meatballs on a stick topped with Frank’s Hot Sauce) and washed it down with Redd’s Apple Ale (which I seriously need to find in some store near me).

There were people in fun costumes (and they must have been dying during that heat blast last weekend!),

and just downright cool costumes!  (My favorite was this Ent!)

There were musical groups (this is Cantiga),

and even a Hobbit hole!  At least that’s what it reminds me of!

I had a tarot reading as well (I was very disappointed that the Shaman group that had been there for years was no longer there.  I had been looking forward to getting my reading from them like I usually do).   It was very confirming for many things, including how I am learning to take care of myself.   Sometimes I still beat myself up for what I allowed to happen to my physical body over the years, and I have to stop doing that and realize that all comes in time.  This didn’t happen overnight, and perfect health cannot happen like that either…not that it will ever be “perfect”, but I want it to be perfect for me!

So I shall continue with my exercise (still going to the YMCA and swimming…something physical at least 4 times a week), eating better (still juicing 3-4 times a week as well as keeping the calories at bay and making healthy choices), and NOT SMOKING!!!  🙂   When I saw my doctor and complained that the pounds were not coming off as quickly as I’d like, she reminded me that I’d quit smoking six months ago and most people put on 20-30 pounds after quitting.  According to my chart, I weigh five pounds less than I did one year ago.  She said that, in her eyes, I’d lost between 25 and 35 pounds if you take into account that I didn’t gain after quitting.

That made me feel better!  All it took was some healthy perspective!  🙂