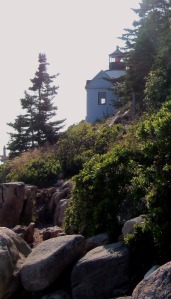 And now, finally, to the Lighthouses!!!

I was lucky enough to see a little over half a dozen lighthouses as I wound my way south along Coastal Route 1 after leaving Acadia National Park.  After having spent the day hiking, climbing, and wading, I still had enough energy to hunt down one lighthouse before calling it a night.

This is Bass Harbor Lighthouse.

Maybe I was just tired from all the activity and the driving (it took me a couple of hours to find this place), but I kind of found this one anti-climactic.

This is a different shot of it.

But I did have ONE MORE climbing expedition that day…climbing down those stairs to get to the rocks below.  My legs were shaky, but I was determined to see the whole thing through!

After all that climbing and hiking, I was ready to find a bed and get some well-deserved sleep– after eating lobster, of course.  So I drove and drove, knowing full well that the Universe would provide even though it was the 4th of July.

The Universe certainly has a sense of humor:

Ok!  So I was going to stay at the Bait’s Motel!

At least it wasn’t this one: 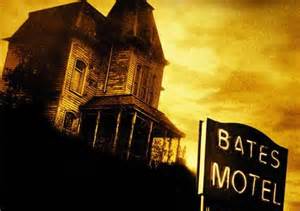 Happily, there was the Anglers Restaurant right next door, complete with a whole lobster dinner for $18.99.  And, boy, was I hungry!!  Washed that baby down with some Belfast Brewery (local) Lobster Ale.  Yum!

I slept the sleep of the dead that night and completely missed the fireworks.  I was OUT before 9:00!

Time to get cracking, I guess!  After hopping in the shower and packing, I was on the road by 5:30.  Nice!  All I needed was coffee, which a gas station was nearby to provide (sadly, I could not find a Tim Horton’s).

I was on the Lighthouse Trail!  I had my map (sort of…more like one of those travel booklets) and I had a full tank of gas.  I was off!

I found Camden first, though.  What a gorgeous harbor!  And by then, I was ready to scrounge up some breakfast.  It was already 6:15 for heaven’s sake!  I wanted to look at the harbor first, though.

While I was looking at the boats and wandering the docks, I noticed a waterfall that seemed to come from beneath the buildings at the top of the hill.

I was really thinking how lucky the folks who got to sit on that deck must be to have that waterfall right there all the time.  After looking at it for a while, I decided that breakfast really was in order, so I headed up to the town.  When I went down the main street, there was a cute place called 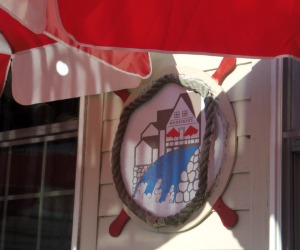 Marriner’s.  I entered and noticed that there were window seats in the back that faced the harbor, so I asked to sit back there; however, once I saw that there was an outdoor porch, I asked to sit outside in the sunshine.  Guess what?  I was on that porch at the top of the waterfall!!  What a perfect place for blueberry pancakes and coffee!

Once my tummy was satisfied, it was back on the Ol’ Lighthouse Trail.

The next one I managed to find was Rockland Breakwater Lighthouse.  That was after my little off-shoot to Rockport, thinking that’s where I was supposed to be.  But I finally found it.  Oh my.  When the brochure said that the lighthouse was about a MILE out into the water, I thought, “That don’t look like no mile!”  Optical illusion.

Yes, it looks like it extends WAY into the water, but a mile?  I didn’t believe it.  So I decided to walk it.

Not that it was a strenuous walk.  Actually, it was just what I needed after all those blueberry pancakes!  It’s just that I found it so hard to believe.

I walked out onto the floating (and rocking) dock to take this shot.

This is the view from the rail on the upper deck of the building.  That was a LONG walk back!  I cannot imagine being out here in bad weather.  I was extremely fortunate with the weather the whole trip!

From there it was on to Marshall Point Lighthouse.  Now I was only going by the little tour book that I’d found in my first motel, and after going back to the internet, it seems I missed a LOT of lighthouses in between the ones I saw!  I guess I will have to go back!

This was a very pretty little place, but it was still not even 10 AM when I arrived, so the museum wasn’t open.  But at least I got to climb around on the rocks!  Those $5 water shoes I bought at Big Lots the week before leaving really came in handy!  I put quite a bit of climbing time on them, and they smelled like the ocean to boot (along with the sea shells in my car trunk).

My next stop (and it was not yet noon) was Pemaquid Point Lighthouse.  Of the lighthouses I saw, this was my favorite!  Not so much the lighthouse, but the ROCKS were CRAZY!! 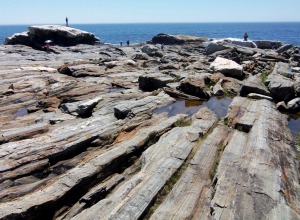 I scuttled along on what looked like petrified wood all the way to the water’s edge…and that was some strong water!  I REALLY wanted to have that water splash over my feet (but not my head, ok?), and I noticed that there were barnacles on the lower rocks.  Hmmm… I wondered if they kept the rock from being slippery. 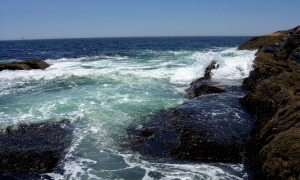 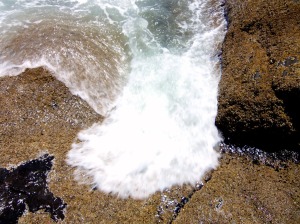 The brown stuff is barnacles…and they made for very sure footing as the water washed up and over my feet!

Okay, now THERE’S the lighthouse!  WAY up there!!  This is one CRAZY rocky shore! 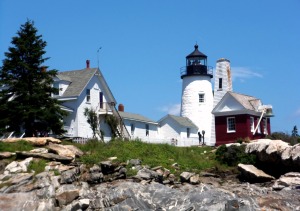 Fortunately, the museum was open, and I actually climbed up that lighthouse!

There was quite a line to get out of the sun, and since only four people could go up at once, it made for interesting chatting while in line.  Seems there were a couple of families where the parents were teachers- one family from Massachusetts and another from South Carolina.  We had a very nice chat about the Common Core Standards.

Narrow, steep…just the way I like it!  And a ladder at the top to get up to the final observation deck.  Good thing my vertigo is in check these days!  Notice that the pic is a bit out of focus?  That’s because my hands were shaking. 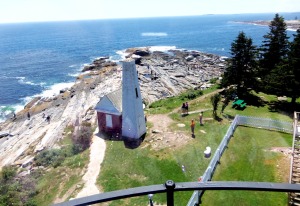 The view was gorgeous! 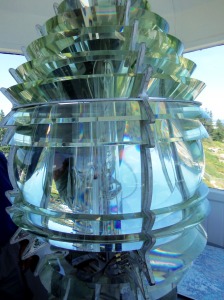 And we were severely warned NOT to touch this lantern in any way.

After that I found Portland Head Lighthouse, and Ram Island Ledge was just in the distance out in the water.

By the time I arrived, the museum was closed; however, the grounds were gorgeous.

It was hard to get a clearer picture of Ram Island Ledge Lighthouse, but I zoomed as best I could!

You can see both lighthouses in this one!

Since I’d hiked on Homan Path, went to Jordan Pond, I had to go to Cape Elizabeth Lighthouse for my eldest daughter. 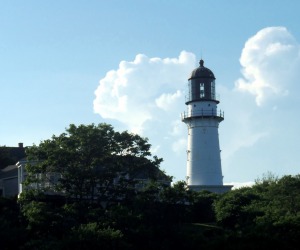 This one was on private property, so this was the best picture I could get of it.

One thing I WAS looking for (even though I knew it was fictitious) was Passamaquoddy Lighthouse (come on, Pete’s Dragon fans!).  There was a West Quoddy Lighthouse, but that was WAY up north and I wasn’t going to drive that much further (almost to Canada).   There is, though, a Passamaquoddy Bay and Native American tribe in that region…so I learned something new.  I kind of wanted to see where the movie was filmed and pretend to be Helen Reddy up on the walkway. 🙂

But, then again, it was filmed at a California Lighthouse near Montana de Oro, and not in Maine!

Just so that I have all my lighthouses in this post, I am going to re-post a picture of the first one I saw on the day I arrived in Maine: Cape Neddick (Nubble) Lighthouse.

Anyhow, by the time I’d seen Cape Elizabeth Lighthouse, I was ready to call it a night and begin the journey home in the morning.  I got to do everything I’d wanted to, which was to eat inexpensive lobster and take pictures of lighthouses.  I’m feeling confident that I can do things on my own, like get out there and take road trips, and be okay with it.

Actually, I was more than okay… I felt empowered.

(NOTE: for those who want more, each lighthouse picture has a link that contains historical information about it.  See more about American Lighthouses at the link below.)