I have been taking time following my bliss of doing nothing for the past few days…and liking it!  But I do want to share my Acadia adventure up a mountain, down to the seashore, and into a forest around a pond.  Such diverse terrains on one island!

Welcome to Acadia National Park (click on the pic for a link)!

It took me several hours to get from Moody Beach to the Bar Harbor and Acadia region, and because I didn’t take the coastal route, it wasn’t as pretty.  I took 295 and then 95 north, and it was just highway driving.  But I’d left at 5:30 AM to get an early start, so that wasn’t too bad.

I originally wanted to stay in Bar Harbor, but when I finally found the place, it was crawling with people for the 4th of July…craft show included.  And my car literally crawled through there amidst the other crazies who dared to drive down those roads, even before noon!  Actually, I am happy simply being able to say that I passed through Bar Harbor and leave it at that.

Not stopping in Bar Harbor allowed me to go straight to the part right then and there, and I am so glad that I did!  I first found the Wild Gardens of Acadia.

After walking the paths through the gardens for a bit, I was beginning to feel adventurous.  The man in the Nature Center told me about a challenging hiking path that led up Dorr Mountain behind the Sieur de Monts Spring House.  Feeling up to the challenge, I decided to go ahead and give it a try.

I am so very glad that I brought my hot pink running shoes!  My sandals never would have made it!

At first the hike started out pretty neutral, and I was feeling pretty darned confident that this was going to be a walk in the park (ha ha).

Walking though the woods was so much cooler than the humid, blistering 96 degrees in the sun, and the trail seemed so tame. 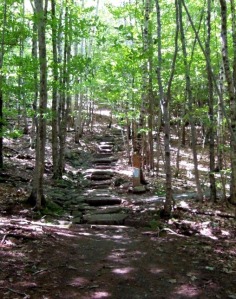 Now doesn’t that look gentle to you?  I thought so…till the steps became steeper and steeper, and steeper!  I was wishing that in some past life I’d been a mountain goat just to climb some of those steps.  I have not been as glad to have quit smoking as I was during that hike!  Turning around did cross my mind, albeit briefly.  I wanted a challenge, and I was going to rise to it no matter what!  In the future, though, I think I will make sure that I am hiking with someone else…just in case.  These are just the pictures going UP! 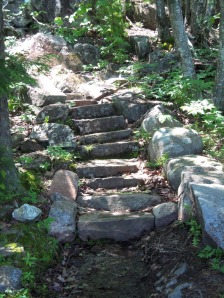 I was very glad to have a water bottle, good shoes, and to have been working out.  I was also glad to have my cell phone just in case.  Once I finally made it to the trail that would cut across (I didn’t go all the way to the top, but darned close), I had to laugh and take a picture of the sign: 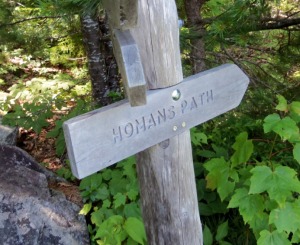 I had to call my daughter, Robin Homan, to tell her that I was on their hiking trail!  According to the link, this trail was closed for a time due to earthquakes!

Here’s a view from as close to the top as I got:

See that ledge?  It’s not as wide as it looks.  This was where I was telling myself that my next mountain climbing extravaganza will include another person.  Doing this solo wasn’t the smartest move…but I did have my cell phone. 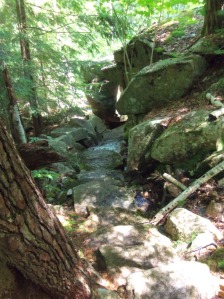 And then I finally made it down!  I was COVERED in sweat and glistening like I’d just been oiled (except for the red face and hard breathing, it might have been attractive to some mountain man…).  The first thing I asked the park ranger was for directions to the nearest beach!  I needed to cool off, pronto!

Parking at the beach was not the easiest thing…after all, several hundred other people thought that going to the beach on the 4th of July was a good idea.  I had another hike along another trail just to get to the beach from where I had to park my car. 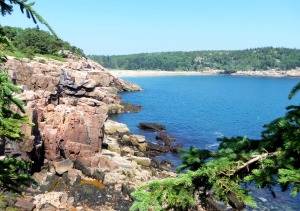 This is me trying to be artistic.  I managed to get a flying gull in there within the “frame.”

The water was very cold and a dark, almost black seaweed lined the shore.  Because I was carrying my camera and didn’t want to put anything down while I took a total plunge, I contented myself with wading in the 50+ degree water.  I certainly cooled off in a hurry!  And I splashed myself with water as well. 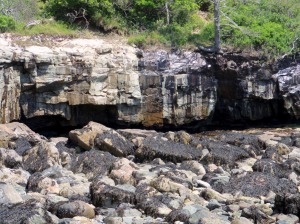 This cool cave was at the far end of the beach.

Well, after my beach excursion, I decided to head toward Jordan Pond.  Hey, I’d seen Homan’s Path, right?  Well, Jojo needed to have her place on my trip!  So off to the next type of terrain. 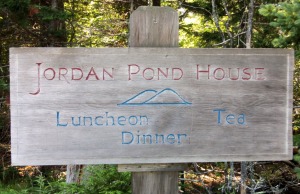 I was told they serve tea and scones at this restaurant.  I won’t know on this trip…there was a two hour wait!  (4th of July thing…) 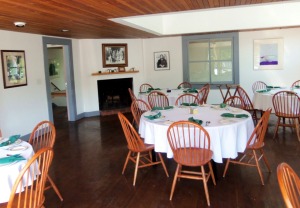 I did sneak upstairs to the closed-off area to take a quick pic.

Even the outdoor seating had a waiting list, so I decided to take a hike along the trail.

In order to avoid disturbing the natural environment, hikers are asked to stay on the boardwalk.  This thing goes on for what must be miles!  I’d like to know who split all these logs and placed them, LEVEL, all along this “pond” (which, by the way, is larger than some of the smaller Finger Lakes).  Passing folks who were coming from the other direction while still remaining on the boardwalk was a challenge! 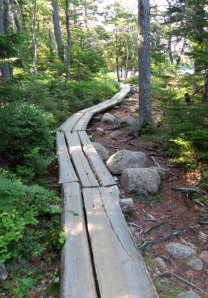 Three terrains: mountain, seashore, forest/pond.  I feel like I traveled to three different places miles and miles away from each other, and yet I was on one island.

How awesome is that?

One comment on “Following My Bliss: Exploring the Varied Terrain of Acadia National Park”