Well, technically, it began July 3 when I left, but I didn’t take my computer with me…and I have been lazily “recovering” since my return.  😉

As take-off day was a cloudy, drizzling day, it was perfect for driving because I didn’t feel like I was “missing” any good weather.  After all the last second running about (getting gas, hitting the ATM, and the all-so-important fuel, coffee), I was heading East by 7:11 AM.

I was originally going to drive right into Boston to hit the ocean and then turn north, but this was the beginning of the 4th of July holiday, and I was not dumb enough to drive into Boston during that time.  Happy 237th Birthday, America!  And I am avoiding the holiday traffic to your birthplace by heading north on 95!

Route 95 ran right through Massachusetts and New Hampshire, and by 3:30 in the afternoon, I crossed the stateline into Maine to continue on my eastward oceanic pursuit.  By this time, any hint of rain had been left behind on the New York side of the Appalachian Mountains, and the sun shone gloriously hot here!

Within ten  minutes, I was rewarded with a little sign that said, “Lighthouse” with an arrow on it.  Woop!!  I followed the sign and came to my first Maine lighthouse, Nubble Light.

If you click on the picture, it will take you to a link about Nubble Light at Cape Neddick.

For me, it was thrilling to come around a curve and have it just appear!  I’d seen Maine lighthouses in movies and on the internet, but it was quite different to actually be there in person!  It made me think that I had somehow stepped into a virtual postcard and could walk around in it.

I hung around the area for a bit, going down to the rocky shore on the opposite side of the peninsula and watching the ocean lap up hungrily against the rocks.  And speaking of hunger, I was starting to feel dinnertime pangs and continued on my quest to find a room and then some lobstah!

Part of driving out to a resort area during 4th of July weekend is the quest for a room.  However, I was certain that what I needed would appear at just the right place for me, so I trusted that the Universe would provide, and It did.  Soon I found a great place to stay, the beach was nearby, and an inexpensive lobster dinner was right across the way! 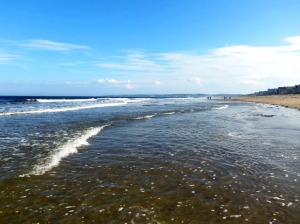 There was a time I really would have been afraid to jump in a car and just head someplace all by myself, but I am so glad that I am beyond that.   Learning to do things for myself, even if by myself, has been a good growing experience for me.  The lapping of the waves on Moody Beach was soothing, and the cool air off the ocean took the edge off the high temperatures.  I walked up and down the beach, exploring as much as I dared before it got too dark to walk the unlit half mile along the side road back to the hotel. 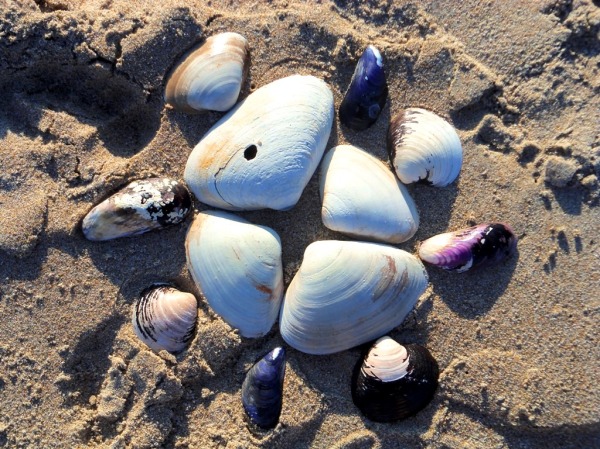 These are my treasures from the ocean!  I am creating a personal medicine wheel with them once I return home.  This is the basic layout, and I will work my own symbolism into it.  I did make the mistake, though, of placing them inside a plastic bin in my trunk.  I was carrying a blanket and additional supplies in a plastic bin in the event of an auto breakdown emergency…and it was 96 degrees out.  Putting the shells straight from the ocean and into the bin was not the best idea.  The smell was horrid!  Lesson learned for future excursions!

Once I returned from the beach, the sign across from the motel got my attention– see for yourself.

As a newbie, I had to get some assistance from the waiter regarding how to “wrastle” with the lobstah!  I am happy to say that he was not only willing to indulge me in my ignorance, but he took a picture to commemorate the event!

This entire dinner, pint of Nut Brown ale and tax included, came to $19.21!  Now THAT’S a bargain!  And it only took me 51 years to get to Maine to experience this treat!

I highly recommend this place (click on pic for link)

And I will be back!