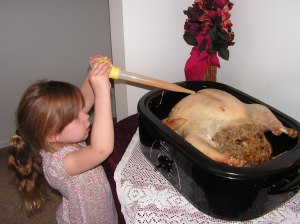 When I am trying to teach my students to become stronger writers, I have taken to creating analogies as a way to get them to think about what they put on paper.  One of my favorites is the stuffing analogy… and it seems kind of timely to share this during the holiday season.

One main skill they need to learn is how to analyze literature and then intelligently discuss the Writer’s Craft in how the piece was constructed.   I use phrases like “insert concrete details from the work” and “comment on how those details relate to the topic”, and more often than not, what I get is either a plot summary or their opinion on the topic with no textual support.  What is needed is a recipe.  Jane Schaffer offers a recipe of “chunks” that can be used well with beginning writers– two sentences of commentary for every concrete detail– which would work as long as quality ingredients are used.  And so I give them the stuffing analogy.

For paragraphs that go on and on about some aspect of the topic, but have very little evidence to back them up, I tell the kids that’s like making stuffing with bread only.  Sure, it will fill the bill, but it’s not very appetizing.  For good stuffing, it needs to have some meat to it.  The details from the literature are the tender morsels that deserve to be shared.  Just popping in quotations that really don’t have much to do with supporting the topic is like throwing gristle into the stuffing.  Adding fatty meat to keep it from being all bread is also not going to be something that the family would enjoy during the holidays, and it’s not all that easy to digest.  Neither is reading a paragraph that is filled with incidental details that really don’t have anything to do with the topic at hand.

Of course, there are those who go in the opposite direction and stuff the paragraph with plot summary.  When I point out that it isn’t what was asked for, they say, “But you told me to put in stuff about the story!”   That’s when I ask them if they’d like to have their holiday turkey simply stuffed with sausage and nothing else.  Sure, it fills the cavity, but it has nothing to hold it together… just a greasy mess inside the bird.  That, too, is rather unappetizing!  That one I know from personal experience with stuffing the turkey with too much meat… and cheap meat, at that!  That culinary mistake led to a racking up of frequent flusher miles on the family commode that year!  Well, that’s not what we want from writing, either!

Like the Schaeffer model of writing, good stuffing is about two parts bread to one part choice meat.   I tell students to carefully select the details they wish to include so that they lend themselves to solid commentary on the topic.   Would they want their mothers to go to the grocery store and buy fatty, gristly meat to serve to them?  Of course not!  Well, I don’t want them to serve me the same on paper.

Once they have that balance of bread and meat, that’s not enough to make the stuffing memorable.  It needs seasoning to spice it up a bit: well-chosen vocabulary, sentence structure variety, an appropriate tone.  These will make their writing much more palatable.   They also need to remember that the key to good seasoning is not to overdo a good thing;  too much salt or going unnecessarily heavy on the garlic will spoil the recipe as well.   Using SAT level vocabulary in every single sentence muddies the clarity of the piece, and if the word is not used correctly, it’s like putting Skittles in the stuffing.  They may taste great on their own, but not roasted inside a bird!

Well, I’m off to read some recipes now.  I’ve brought home a feast to go through during my holiday break.  Bon appetit!