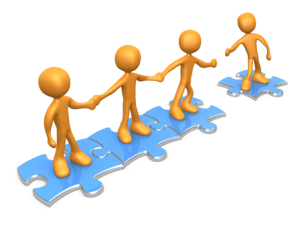 Yeah… that’s me on the far right.

Staying connected… not something I have always been very good at, except for my immediate family.    I think the reason I see myself in a desert is because it’s someplace without connections… and it is sometimes easier to travel alone than to risk being hurt again.  In a technological world that lends itself toward maintaining connections between people, I seem to be more inclined to keep to myself.

When I divorced and moved a hundred miles away, all the friends I thought I had just drifted away from me.  I remember making calls and trying to keep connected, but most of them just seemed to distance themselves from me.  And so I felt cut off… “unplugged”.    I was in a city where I knew absolutely no one, and I tried very hard to hang on to the connections I thought I had.  Between the physical distance and the distance I heard in their voices when I called to talk to them, everything I ever knew just seemed to float away from me.  It hurt, and I guess that hurt has helped me to build a wall around myself.  Cliched, yes… but true.  Abandonment issues stem way back to my childhood, and I probably carry some of that into my middle years by holding back and being more reserved.  I think that I probably have better cyber connections than I do in real life.  Funny how the internet has allowed for the creation of a whole other world… an alternate reality.   But that alternate reality does allow a sense of safety and personal distance for someone like me. .. and I am certain that there are more like me in that virtual world.  However, that’s not a world I really want to “live” in… because it isn’t “living”.   It’s more like Harry Potter’s Mirror of Erised; staring into a screen and not another’s eyes.

I was in a relationship for more than nine years after my divorce… well, on again/off again anyway.  I thought I’d finally been able to connect… I tried so hard.  Unfortunately, he also got swept up in the alternate reality that is the internet, and that escape from what he viewed as a miserable existence in the real world became more important to him than trying to build something real with me.  Like me, real connections scared him because of past experiences.  That became the latest “unplugging”.

I do connect with friends, albeit periodically.  I actually do not think that I have anyone that I could call at 4 AM to take me to the airport… another cliche, but another that I think is true.  And it’s not that people haven’t reached out to me… they have in very wonderful ways.  But I cannot seem to break this wall.  I let people in only so far.  I do love and care about them, but this intrinsic part of me always holds back.  And so I find myself wandering in this desert because solitude has become safe for me.   I have become so afraid of being abandoned that I am hesitant about my connections.  I worry about shortages, power surges, lines being cut, and plugs getting ripped out, and so I pull back from plugging in.

But that’s Snape’s world.  Although I am not clinging on to old memories to prevent me from moving forward, I am clinging on to the belief that being by myself is safer than taking a risk to connect with others.   But I really do not wish to stay this way.  The only thing is, I don’t know how to break out.   I do go out, and I do socialize… but only up to a point.

Connecting is risky.  While “plugging in” can bring light, there is always the fear of an outage in the back of my mind, I guess.  I’ve had my share of power surges that end up with me being in the dark again.   After having the plug pulled so many times, I have a fear of putting the plug back in again.

Well, recognizing the problem is the first step toward a solution.  In this complex world where there are so many people, like me, who have disconnect problems of their own, how does one make a lasting circuit?  In this season of light, I don’t want to be unplugged.   Like the return of the longer days of light, I want to have more light in my life.  I want to plug in to what life has to offer and actually unplug myself from the virtual world more.  But again, that’s risky.  I have to find a way to break that fear, knowing that not all connections will stay lit.  There have to be some that will, though.  I have it with my children, and so I know that I have the ability to connect; I just have to be willing to take the risk.