One thing that I really enjoy is studying the symbolism of the Tarot and applying the journey of the Fool through the major arcana to my own journey.   Most recently, the Hermit card has been appearing quite frequently, so I decided to just stop and pay attention to it.

The first thing I did was just sit and LOOK at the image.  The deck I was using for my reading had the traditional depiction of the Hermit… an elderly man in a grey, hooded robe, holding a lantern in his right hand and a staff in his left.  He faces to the left, but his eyes are cast downward.   For me, I interpret this as one who is looking back on the past in contemplation.  He is shedding light on the past and is thinking about the path that has led him to this point.  Also, there is no one else in the picture… he is alone.   When I think of the word “hermit”, I think of someone who has made the conscious choice to isolate him/herself for whatever reason.

Ok… so this does seem to apply to me at the moment.  As I am still in my “desert state”, as I call it, I can relate to what I see in this card.  Before I make an attempt to move forward (which would be facing toward the right, as I interpret the cards), I do need to take a good look at where I have come from.  Contemplating on past actions and how they have led me to where I am at this moment is necessary if I am to take in the lessons of my journey so far.   I guess I am coming to a point where I am finally beginning to more embrace my solitude rather than being filled with loneliness.  This is something I’ve been struggling with for quite a while.

It wasn’t that long ago that my grown children set out on their own, leaving me to live by myself for the first time in my life (with the exception of a two month period right after I left my husband).    I also ended a nearly ten-year relationship which, truth be told, left me feeling lonely most of the time because we lived fifty miles apart.   I was actually more of the Saturday night girlfriend than anything else, it seemed, and was never going to go beyond that.   So I made the decision to break it off and begin to entirely rebuild my life as a woman on her own… a woman in transition.   That’s where the whole concept of the desert came from; truly living alone for the first time.  And with the frequent visit of the Hermit in my readings (as well as the 9 of Pentacles), it’s a message from the Universe to simply take a good contemplative look at the past and learn from it.  While there have been many mistakes (who doesn’t make them?), there have been just as many successes.  I am who I am right now because of the choices I’ve made.  Revisiting mistakes from this mind-set has been illuminating because I am trying very hard not to judge myself… I am just looking at things I’ve done and seeing how they have helped to create the person that I am.   And since I actually like who I am, I am basically reminding myself of the lessons I’ve learned from those mistakes.  Right now is a good time to revisit the lessons so that I do not repeat any behaviors that made me unhappy.   So, looking at the card, I see myself facing my past (to the left), illuminating my path (the lantern), and contemplating on the journey that has brought me to this place (the bowed head, downcast eyes, and walking stick).    And while the word “hermit” often carries a negative connotation, I am feeling that this is a very good place for me right now.  I’m very comfortable with the solitude and with the time for contemplation.

While I was spending time with this card, I decided to look at other artistic interpretations of The Hermit.  I am fascinated by the diverse representations of this concept of loneliness vs. solitude, but one in particular really struck me.

Another introspective tool I use is making connections to characters in the books I read.   When we read, everyone has a character that seems to stick out in our minds more than any of the others.  Most often, it is the Hero or protagonist of the tale.   However, there are instances when a secondary character really seems to get under our skin, and when that happens to me, I examine the character closely to see what connection I have with him/her.  I believe that the connection happens because that particular character exhibits traits that resonate somewhere inside me.   I’ve already spoken of how Dorothy’s companions resonate parts of myelf: intellect, heart, and courage.  This time I want to focus on the one character from the Harry Potter series that I have felt a strong connection to right from the very start: Severus Snape.

Right from Snape’s first dramatic entrance into his Potions class at Hogwarts, I felt a strong connection.  He strides in with a confidence that also screams arrogance, but he has such a strong presence about him.  He expects correct answers from his students, and he is unnecessarily hard on Harry Potter.   He reminds me of myself in my own classroom.  I have very high expectations for my students, and I also have a tendency to be dramatic.  While I always try to be conscious of how I speak to students, I do have a tendency to be overbearing and, yes, arrogant, at times.   And do you know what?  I am actually very okay with that.  Like Snape, who does not care if he is liked by his students or not, I am there to do a job and to do it to the best of my ability. 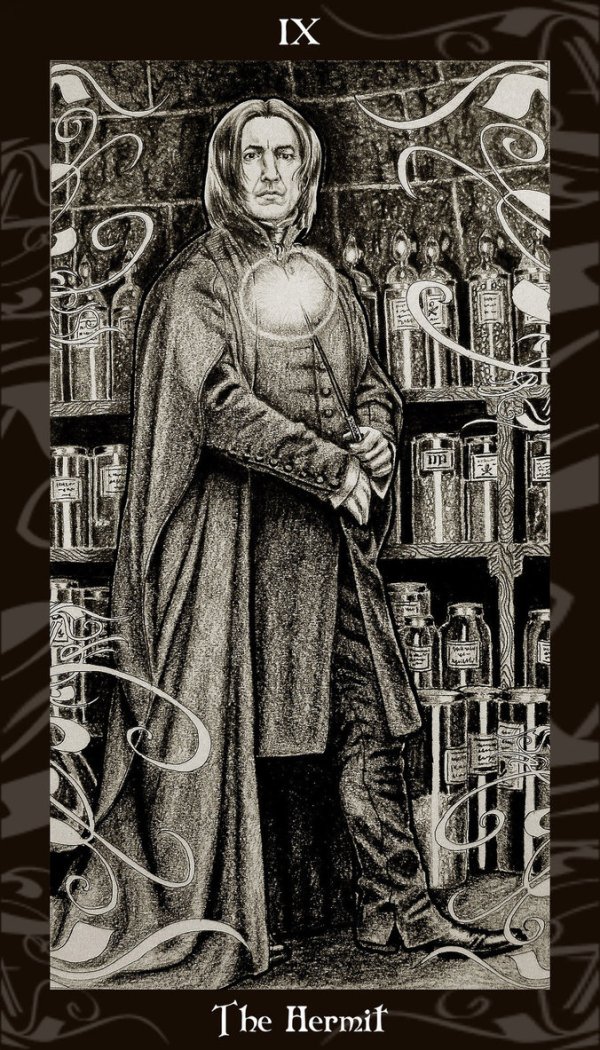 I see Severus Snape as the misunderstood loner.  He forms very few personal connections because of how he was treated in his past, first by his parents, and then by other students when he was in school.  Like Snape, I built walls around myself as a form of protection.  I spent most of my life feeling unloved and unappreciated, being told I was stupid, of a host of other things I don’t care to mention here.  Inside, I felt alone.   I cried when I “saw” Snape’s memories of how James Potter bullied him because I remember what that felt like for me.  I understand why he is harshly assertive in his classroom; it’s his defense against being told he was nothing.  It’s his way of proving his worth… I get that because I guess I do it myself.   I am dramatic in the classroom and on stage because it’s my way of saying, “Hey… I’m here!”  And even though we (Snape and I) are surrounded by people–he with his students at Hogwarts and the other teachers, and me with my own students and children– we both have a tendency to feel disconnected.  Many times in my life, I have felt alone in a sea of faces.   In that way, we are both like the Tarot’s Hermit.   We choose to stay close to ourselves, and we both ruminate on the past.  I guess his character speaks to me most because I actually do not wish to live my life entirely like his.  I definitely understand how he came to be… and I see many of his traits when I look in the mirror.  But what I do not want to do is to hold so tightly on to the past that it stagnates my present.  Snape never loved again after being jilted by Lily.  And even though he had been angry with her, his love for her dictated how he lived the rest of his life.  While that may be a totally romantic notion (and I have to admit that I cried my eyes out when I “saw” his memories of Lily), it was also very self destructive.   I too have loved passionately, and like Snape, it didn’t work out and I was devastated.

But unlike Severus, I don’t want to carry a torch for someone who chose not to love me.  I don’t want to hang on to the memories of what we used to have instead of facing the reality of what eventually did happen.  I don’t want to stare into the Mirror of Erised for the rest of my life, looking at shadows of what can never be, no matter how much emotion I feel.   By day, Snape lived the effects of his shattered dreams through his harsh words and sometimes rash behaviors (joining the Death Eaters).   By night, he ruminated in his dream world of what he wished he could have had with Lily and the guilt he felt about his role in her death.   His dreams ate away at him; instead of taking the lessons by looking at the past and moving onward, he got stuck.  He never left the Hermit stage… at least not on a personal emotional level.   As much as I love the character, I do not wish to be entirely like him.  I admire his courage, I enjoy his cocky arrogance in the classroom, I am in awe of his intellect… but I feel pity for his stunted emotional growth.  He could not let go of the pain of the past, and he could not move forward.

While I may be using this Hermit/Desert time to assess my journey, I fully intend to move forward with my life.  I will look at what has come to pass, but I will not hang on to it… at least the parts that do not serve me well to hang on to.  Memories are treasures, but hoarding ALL memories–like the bad ones– is not going to be good for me in the long run.

2 comments on “The Hermit, Severus, and Me”